I love recreating comic costumes. While I love learning how American bellydance pulls from various Middle Eastern cultures and how it developed in this country, I also love seeing the form I love pop up in popular contemporary culture, especially in comics. While I can't explain away the overt sexualization or orientalist overtones, seeing some of the costumes I love worn by kickass female characters almost makes up for it from Old School Star Trek with Scotty's 'Wolf-In-The-Fold' dancer to  Aladdin's Jasmine to Star War's Leia in Return of the Jedi. So, if you're a bellydancer and into comics, it's pretty easy to adapt your favorite costumes to some of my favorite warriors.

I loved Walter Geovani's art with Gail Simone's female oriented writing. Do you have a coin belt and a coin bra? If so, done! Do you have a sword for balancing? Even better!

When Christopher Priest introduced the Dora Milaje, they were kickass but slightly overtly sexual bodyguards in high heels. Luckily, the film and ensuing comics course-corrected leaning more towards the badass side of the characters. Cosplaying as a Dora Milaje only requires a gahwazee coat, an ornate bra\belt, and a saiidi stick. Easy Peasy.

Scarlet Witch is of Romani folk. One of my favorite Avengers comics, featured her doing a Romani dance. In the 90s, early 00s, her costume became even more 'American bellydance' inspired with the circle skirt, gold bracelets, and coin belt. Any dancer with a red circle skirt, red coin belt, red headband and red choli could easily rock a Scarlet Witch cosplay.

I love Xena because the TV show blatantly incorporated various 'American bellydance'-styled routines from veil to poi to everything in-between. Most of the show's belly dance-style costumes were lightly decorated bras. Although I thought Gabrielle wore a Costless-style outfit in 'Who's Gurkhan' the available images (see below left) say otherwise. Although you can rock any of the show's midriff (or non-midriff-baring) costumes for Xena-Gabrielle inspired dance costumes, to recreate Gabrielle's bellydance specific outfits, pop gold outlines onto a blue bra. For a Where's Gurkhan specific cosplay use a gold sequin belt with loops, for the Caligula-style outfit, just rock a blue belt with lace. 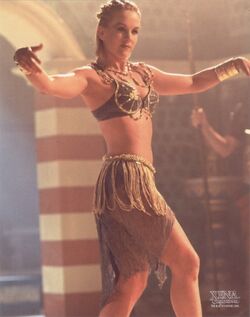 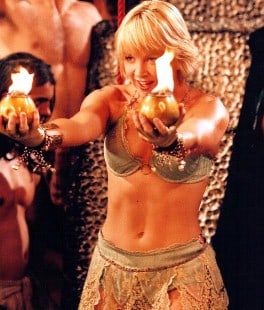